Muskoka Place Gallery & Brandy Creek Music & Publications are delighted to present the 2015/16 fall & winter season as we continue the tradition of the Company of Good Cheer.

The Coffee House takes place on the last Saturday of the month at 8:00 pm at Muskoka Place Gallery:

We hope to see you, sun or snow!

Mike is a fine singer & a brilliant musician; if it has strings or keys, Mike plays it well.� He has a big baritone voice & a great way with a song.� Not only does he relate well with audiences, he entertains them, all while personally inhabiting his songs, whether an old time country tune, a familiar sing along or one of his own nicely crafted songs.� Raised in the "kitchen parties" of PEI, he travelled to the streets of Vancouver, learning how to squeeze the accordion, moved to Toronto singing and picking guitar & playing bass with the jugband Jughead, which wrote & recorded the "Hockey Song" in �93 & was awarded a gold record. He recorded & released his debut solo cd "Mighty Lopez" in 2013. His live show is best described as a one man variety show. Performing on the accordion, banjo ukelele, 6 & 12 string guitar, & stand-up bass, Lopez continues to delight audiences with his eclectic mix of �roots� music, classic & original.

Inspired by songwriters such as Townes Van Zandt, John Prine and Jesse Winchester who meld beauty with wit, Grady�s acoustic guitar and voice are conduits for traditional and folk musings, creating his own works on topics as wide ranging as love, death and vegetables. Take My Hand is the new thirteen-song album, released in 2014. Born into a music family, he has performed at Toronto�s Canadian Music Week, NXNE, the Mariposa Festival and toured Germany & France.

An added bonus is the appearance of virtuoso guitarist Jamie Sherman who will accompany both Grady & Mike.

Kunle is an acoustic singer/songwriter & guitarist of folk and soul music rooted in West African stories and rhythms. Nigerian born and currently based in Toronto, he brings together unique guitar tapping, harmonica, talking drum, global influences and rich vocals to take audiences into what he terms �music with no boundaries.� Raised in Nigeria, moving to Ghana to launch his musical career and spending time on the sea, Kunle�s style is a mix of cultures from Celtic to blues to rock to African folk. Kunle has played at the Mariposa Folk Festival and Toronto�s Habari AfricaFest. He has performed for the Foreign Minister of Germany on an official visit to Ghana and for dignitaries at the British High Commission and United States Embassy in Ghana. His sensitivity and kindness, gentleness and optimism charm his audiences. 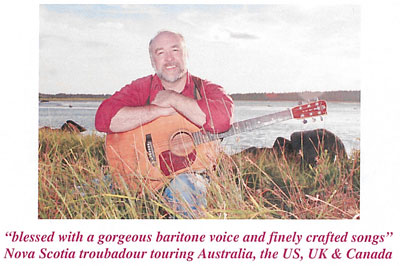 Dan grew up in Nova Scotia, steeped in family tales of turn-of-the-century Halifax & the magic of its music. Early in his career, Dan was introduced to Stan Rogers� music, an influence that would never leave him. Several years later in the midst of his history degree, Dan would marry his own natural storytelling voice and love of music. His fifth recording, �Fields of Dreams and Glory?, engineered by the renowned music producer Paul Mills, propelled Dan�s music to the world stage. This CD amassed 74 consecutive weeks of international airplay ? from shows throughout Canada and the USA, to Australia, New Zealand, Belgium, Holland, the UK, Ireland, and Israel. Thirty years of performing and many recordings later - from the coffeehouses, pubs, and bars of his early beginnings in Atlantic Canada, Dan, �blessed with a gorgeous baritone voice, and an exceptional command of phrasing, light and shade,� continues to convey his finely crafted songs to audiences through his yearly tours in the UK and performances in and around the Canadian Maritimes. Recent travels in Ontario, the US, as well as a tour of Southeastern Australia in 2007 have only furthered to cement Dan�s commitment and passion to the songs and stories of his Atlantic Canadian home.

Ian is a singer-songwriter with a passion for a good story and the poignancy of everyday life in small communities. �Listening to Ian�s music is like catching up with an old friend; his voice recalls memories we all share, and you just want to be there too� - English journalist, Tom Marshall. His music has been described as �Paul McCartney meets Levon Helm meets Sesame Street". Ian has a uniquely engaging and entertaining stage presence and an ability to connect with his audiences. He loves to augment his voice, guitar, and ukulele with quirky anecdotes from home and abroad. Since returning from years of overseas teaching, Ian has played nearly 600 shows, earning much respect from peers and fans. He has won songwriting awards in South Korea, Guelph and Kitchener, and his music is often played on CBC Radio. Ian has shared billing with James Gordon, Wendell Ferguson, Ashley MacIsaac, Danny Michel, and has opened for John Mann (Spirit of the West), Tom Wilson (Blackie and the Rodeo Kings), Bob Egan (Wilco, Blue Rodeo). He has performed at festivals such as the Summerfolk Festival in Owen Sound. Ian�s song �Art Girl� was picked up by the Korean label Polyphone and can be heard on a compilation album entitled �Songs of the Wayfarer? alongside artists such as American folk icon Peggy Seeger and Academy Award winning songwriter Glen Hansard (2006) This year, Ian released his 5th CD �Hawkstripe? & has just returned from tours out West & down East in support of his new songs.

Her world-class performances never fail to take her audiences on an emotional journey from totally ridiculous to deeply intense, and her songwriting career is very much the same. She accompanies her vocals on guitar, keyboard and �looping� effects. After five full-length albums, 12 years of touring, and over 15 industry awards for songwriting, vocals, and performance, including �Best Song? and ?Best Vocals on a Recording? at the Northern Ontario Music and Film Awards, �Best Song? OCFF Songs from the Heart contest, �Female Performer of the Year,� �Best Folk Act,� and �Best Song? at the Toronto Independent Music Awards, �Best Country Song? Great American Song Contest, Angie has recorded her new album, �Wisdom and Foolishness.� In the spring of 2014, she was featured as a speaker at TEDx Nickle Centre�s Think in 3D. Nearly 15 years of crafting, performing and living her music as venerated and multi-award winning Artist, Angie Nussey�s evolution from Canadian singer/songwriter to respected global artist mirrors her own evolution from small-town Ontario darling to music industry innovator, visionary and spokesperson.

He grew up in inner-city Toronto listening to his family�s vinyl collection, loved and played over and over again; Pete Seeger, Stevie Wonder, The Temptations, Big Bill Broonzy and Elizabeth Cotton.� A gifted multi-instrumentalist, he travelled to West Virginia, Kentucky and Alabama to learn fiddle and banjo traditions of the south; to Beale Street in Memphis and Nashville, Tennessee and up the eastern seaboard playing blues, ragtime and good-time songs. With Sheesham Crowe, his 2012 release, �1929� was nominated for a Canadian Folk Music Award for Best Traditional Album. Lotus Wight can workshop on dozens of subjects; jaw-harp, hambone, crooked banjo tunes, country blues, West-African gourd instruments, bass harmonica playing and more. After years with his group and as a busy side-musician, (Serena Ryder, Jenny Whitely, Luther Wright and the Wrongs, Peter Appleyard), Lotus is delivering a solo set that is astounding and delighting audiences wherever he chooses to play.

Mose is one of a kind. While he draws on a wide range of musical sources, from the early 1900's through the 40's, his style defies categorization or comparison � the blend is unique. He bills his music as Jazz, Blues, Ragtime and Swing because, as he says, "those are the four things I've been accused of most often." His original technique of finger-picking is dubbed 'stride guitar' by Canadian music journalists. Mose performs in Canada at festivals, clubs and theatres & has also toured widely through the US, as well as in England, Scotland, Germany, Australia and, most recently, Northern Ireland. With Ken Whiteley & Jackie Washington, he was nominated for a 'Roots and Traditional' Juno award for their first album, "Where Old Friends Meet."

For 40 years, Charlie has been an itinerant bluesman, traveling the globe, hosting concerts and conducting workshops. Charlie has performed frequently at such festivals as the Harbourfront Jazz & Blues Festival, the Mariposa Folk Festival, the Mill Race Festival of Traditional Music and in the eastern US. He has also performed at The Kitchener Blues Festival and the Fredericton Harvest Jazz & Blues Festival. He has played the blues with the Gypsy Kings in France, tango bands in Argentina, reggae players in Jamaica, and flamenco dancers in Spain, where his passion for the blues has always erased national and political borders and brought strange bedfellows together to share the music.

Beverlie is a singer, musician, folklorist and author with a BA in French from U of T and a music minor. She travelled the world with her trio The Chanteclairs, singing folk songs when folk music was main stream, performing on the CBC, CTV, BBC, US and European TV networks. She has performed at festivals such as the Mariposa Folk Festival, the Fredericton Jazz & Blues Festival, the Mill Race Festival of Traditional Music, etc. & at venues such as The Riverboat, Massey Hall, Maple Leaf Gardens & the CNE Grandstand. She sings traditional & contemporary folk music, blues & �tin pan alley,� accompanying herself on 6 & 12-string guitars, dulcimer & autoharp. She sings in English, French, Spanish, & other languages. She was an early member of Mariposa-In-The-Schools, is a founding member of Kaleidoscope-in-the-Schools Muskoka & a director of Muskoka Lakes Music Festival/Muskoka Chautauqua. Her latest book, With Knowing Eyes; Canadian Women in Song, includes traditional & contemporary songs, with music, chords, etc. She taught a course at WLU based on its content. A CD of selected songs is in progress. She is President of Brandy Creek Music & Publications Inc.