Muskoka Place Gallery & Brandy Creek Music & Publications are delighted to present the 2014/15 fall & winter season as we continue the tradition of the Company of Good Cheer.

The Coffee House takes place on the last Saturday of the month at 8:00 pm at Muskoka Place Gallery:

We hope to see you, sun or snow!

Inspired by nature, community, and the power of the collective voice, Ondine Chorus explores the marriage of vocal expression and physical movement, the relationship between performer and venue and the spatial relationship between singers and audience.   Equally adept at creating original works, arranging traditional songs, setting treasured poems to music or improvising thematic sonic constructions,, Ondine Chorus delivers a hushed and compelling experience of the collective voice. Their recordings have been featured on the CBC. If you missed their stunning performance at Voices in the Village, here is an opportunity to see them in an intimate setting. 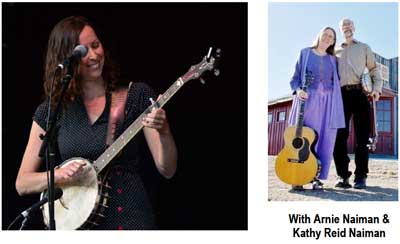 Having grown up surrounded by her musical family (Arnie Naiman, renowned banjo player, and Kathy Reid-Naiman, internationally acclaimed children's musician), Hannah was immersed in the sounds of clawhammer banjo and Appalachian ballads.  She harvested the sounds and themes of this music in her bones. Hannah's songs "are a little bit crooked, a little bit new." Her sound is reminiscent of Gillian Welch and The Be Good Tanyas, and inspired by Ola Belle Reed and Hazel Dickens. While Hannah's style is decidedly Appalachian folk, she's also influenced by styles outside the genre, such as English and Irish ballads, African spirituals and gospel music, as well as the pop and indie music that inspired her early songwriting. You may hear any combination of fiddle, banjo, guitars, dulcimer and banjo uke. Hannah has been thrilling audiences at folk festivals across Canada this summer.

You asked us to bring them back…so here they are, accompanying their gifted daughter! Kathy & Arnie (Ragged But Right) have been singing and playing music for over 30 years. Their involvement and contributions in old time country/Appalachian & traditional folk music and dance, and children's music genres has had a profound and lasting effect within the community at large and are known far and wide. Their music is in regular rotation on Galaxy (satellite) and folk channels.

Ian is a singer-songwriter with a passion for a good story and the poignancy of everyday life in small communities. "Listening to Ian's music is like catching up with an old friend; his voice recalls memories we all share, and you just want to be there too" - English journalist, Tom Marshall. His music has been described as "Paul McCartney meets Levon Helm meets Sesame Street. He loves to augment his voice, guitar, and ukulele with quirky anecdotes from home and abroad. Since returning from years of overseas teaching, Ian has played nearly 600 shows, earning much respect from peers and fans alike. He has won songwriting awards in South Korea, Guelph and Kitchener, and his music is played on CBC Radio. Ian has shared billing with James Gordon, Wendell Ferguson, Ashley MacIsaac, Danny Michel, and has opened for John Mann (Spirit of the West), Tom Wilson (Blackie and the Rodeo Kings), Bob Egan (Wilco, Blue Rodeo). He has performed at festivals such as the Summerfolk Festival in Owen Sound and has released a new CD.

Louisa blends a haunting voice with minimalist instrumentation. From the first plucked note of her violin the listener is captivated, and remains immersed as her honest, pensive voice sings in a language that may be unfamiliar to most, but is recognizable in its warmth and emotion. Her original songs, written and sung mostly in the Czech language, are soothing, searching, atmospheric melodies woven with dreams and lullabies.

Anne Walker is an amazing singer-songwriter whose music is stunning. Her powerful, gorgeous voice delivers the beautiful songs she writes, and will engage your heart strings and your sense of humour without fail. Anne has performed frequently at festivals and clubs, including appearances at Summerfolk (Owen Sound), Home County Folk Festival (London), Caffe Lena (Saratoga Springs) and Rasputin’s (Ottawa). Anne also has a following in Ireland where she won the song competition at the Ballyshannon Folk Festival. Her recordings have been produced by Tony Quarrington and Paul Mills. Anne has created “The Coulson Women’s Institute” A multi-media performance with original songs, stories, vintage photographs, historical documents and artifacts. Through the lens of the Women’s Institute, an organization of rural women, Anne traces the changing way of life in a rural Ontario village in the twentieth century. Muskoka has an active Women’s Institute in the village of Windermere.

Eve Goldberg has lifted audiences across North America with her heartfelt and insightful songs and solid instrumental work. Her fluid vocals embrace all the styles she loves—folk, blues, country, bluegrass, old time, and jazz—with equal affection and mastery.

Jane Lewis has followed her love of words from the printing press to the spotlight with soul-bending lyrics, transcendent compositions, and crystal clear vocals. Her thoughtful piano and accordion playing, mastery of harmony, and upbeat presence add a sparkle to any stage.

Sam Turton brings a powerful delivery, ringing slide guitar, and soulful groove to his songs of personal and social awareness. Inspired by delta blues and southern gospel, Sam's passion is bringing people together in song.

As solo performers, Eve, Jane, and Sam had each carved out their own niche in the folk/roots scene. But when they came together for a one-time triple bill in 2012, there was a certain "spark" that couldn't be denied. The three loved the magic that came from the gathering of their songs, voices, instruments and styles, and a bona fide trio was born.

Gary began his formal studies at The Royal Hamilton College of Music and went on to study Classical and Flamenco guitar in Spain. He was on the Faculty of Music at Mohawk and became part of their Music Advisory Committee. Gary has completed a number of projects with musicians from around the world, notably India, China, Spain and South America and has put together a number of performing ensembles. His latest group is called Zarabanda, a euro-jazz sextet featuring more of his original compositions. He continues to perform, compose and record his original music solo as well. Among his awards is Best Classical Musician, presented by the Hamilton Wentworth Council of the Arts and The City of Hamilton Arts Award for Music. Most recently Gary with his life and business partner, Barbara Milne, received The City of Hamilton Arts Award for Lifetime Achievement.

Mose is one of a kind. While he draws on a wide range of musical sources, from the early 1900′s through the 40′s, his style defies categorization or comparison – the blend is unique. He bills his music as Jazz, Blues, Ragtime and Swing because, as he says, "those are the four things I've been accused of most often." His original technique of finger-picking is dubbed 'stride guitar' by Canadian music journalists. Mose performs in Canada at festivals, clubs and theatres & has also toured widely through the US, as well as in England, Scotland, Germany, Australia and, most recently, Northern Ireland. With Ken Whiteley & Jackie Washington, he was nominated for a 'Roots and Traditional' Juno award for their first album, "Where Old Friends Meet."

For 40 years, Charlie has been an itinerant bluesman, traveling the globe, hosting concerts and conducting workshops. Charlie has performed frequently at such festivals as the Harbourfront Jazz & Blues Festival, the Mariposa Folk Festival, the Mill Race Festival of Traditional Music and in the eastern US. He has also performed at The Kitchener Blues Festival and the Fredericton Harvest Jazz & Blues Festival. He has played the blues with the Gypsy Kings in France, tango bands in Argentina, reggae players in Jamaica, and flamenco dancers in Spain, where his passion for the blues has always erased national and political borders and brought strange bedfellows together to share the music.

Beverlie is a singer, musician, folklorist and author with a BA in French from U of T and a music minor. As a member of the trio The Chanteclairs, she travelled widely & performed at festivals such as the Mariposa Folk Festival, the Fredericton Jazz & Blues Festival, etc. & at venues from The Riverboat, to Massey Hall, Maple Leaf Gardens & the CNE Grandstand. She travelled the world with her trio singing folk songs when folk music was main stream, performing on the CBC, CTV, BBC, US and European TV networks. She sings traditional & contemporary folk music, blues & "tin pan alley," accompanying herself on 6 & 12-string guitars, dulcimer & autoharp. She sings in English, French, Spanish, & other languages. A veteran performer, she was an early member of Mariposa-In-The-Schools, a founding member of Kaleidoscope-in-the-Schools Muskoka & a director of Muskoka Lakes Music Festival/Muskoka Chautauqua. Her latest book, With Knowing Eyes; Canadian Women in Song, includes traditional & contemporary songs, with music, chords, etc. She taught a course at WLU based on its songs. A CD of selected songs is in progress. She is President of Brandy Creek Music & Publications Inc.